June 2019 at Bokarina and Noosa

Celebrating the Silver Anniversary of The Sunshine Coast Choral Society and the Noosa Chorale. Performing Verdi’s Requiem as a combined choir, accompanied by the Requiem Orchestra, and supported by 4 Soloists. Adrian King, Conductor brought out the very best in all performers. In Noosa the Choir had a standing ovation from a full house, as well as at Venue 114 Bokarina. 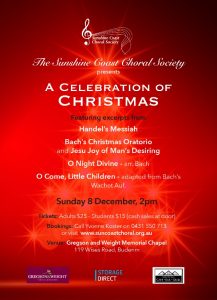 Gregson & Weight Chapel, Buderim was filled to capacity both physically with our faithful supporters as well as the sounds of music from Bach’s Christmas Oratorio and Handel’s Messiah.

Our very talented Natasha Koch accompanied the Choir and our incredible Adrian King conducted the Choir. The audience gave a standing ovation to the Hallelujah Chorus and wanted an encore. The concert set the scene and the tone for our own personal Christmas Celebrations.

Karl Jenkins, in his Requiem, blends together the traditional form of the requiem or ‘mass for the dead’ with a fusion of western and eastern musical cultures, topping the classical charts in 2005.

Jenkins incorporated other surprises in the work too, including the driving pulsating, even menacing, rhythmic force of the Dies Irae as well as extraordinary tender and ethereal sections culminating in the hauntingly beautiful In Paradisum. 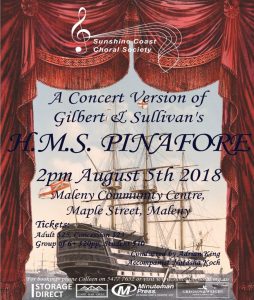 The hills of Maleny were alive with the sound of HMS PINAFORE on August 5th 2018. Natasha Koch displayed her amazing keyboard skills, depth of knowledge of the music and her ability to provide the orchestral parts on a keyboard when she accompanied the Choir in this performance.

We were privileged to perform Jennifer Carr’s new suite of 5 pieces called ‘Seascapes’, which was the world premiere of this emotive work. 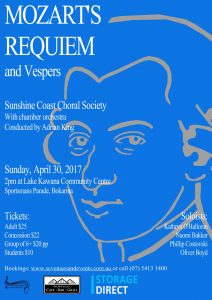 2017 started in April with the performance of Mozart’s highly regarded Vespers and Requiem. 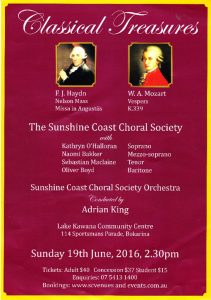 ‘Classical Treasures’ was the theme for the Concert in June, held at Lake Kawana Community Centre. 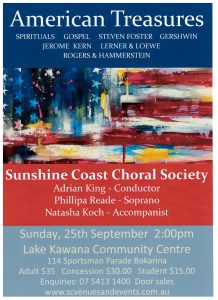 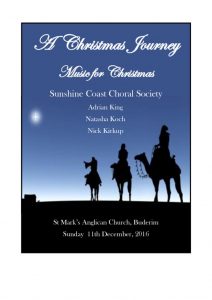 In December, the Sunshine Coast Choral Society performed a selection of Christmas music at St Mark’s Anglican Church in Buderim.

On the 9th April 1995, we ambitiously took on Handel’s “Messiah” and gave a performance at Easter time in St. Mark’s Anglican Church in Buderim with soloists Rachael Duncan – Soprano, Therese Hayden – Mezzo Soprano, James Coady – Baritone and Neil Atkinson who had to conduct the choir and sing the Tenor solos! This performance was accompanied by Jean Conwell on the keyboard.

The Sunshine Coast Choral Society was founded in 1994 by the late Neil Atkinson with assistance from Bruce Ramm, Sharon Coles and Jean and Alan Conwell. Jean was the accompanist for the Society until her retirement in 1999 which was followed by the appointment of Fay Baker, who capably filled the position until early 2005, at which time she became Assistant Musical Director until relinquishing that post in December 2005. Alan was the Treasurer for the Society from its inception until 1998. Auditions were held in May/June and rehearsals started in July with forty seven members.

Rehearsals were held in the Lecture Theatre at Matthew Flinders Anglican College. At that time the college was relatively new to the area and they were most supportive of the Choral Society as we struggled to get a financial footing and increase membership.

In these first few months we were able to prepare a few pieces for two charity concerts (Concert for Rwanda and the Drought Relief Concert) and the Mayor’s Christmas Carols. In December 1994 we held our first concert in the Buderim Hall and performed John Rutter’s “Gloria” and “The First Nowell” by Ralph Vaughan Williams.